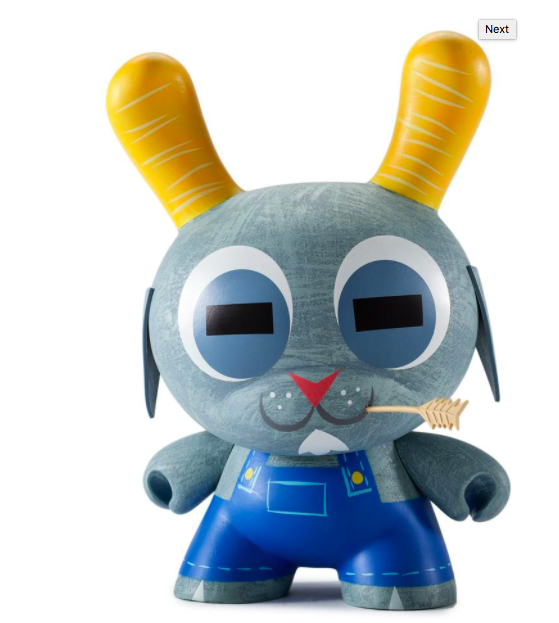 Thursdays are great aren’t they? Means you’re almost to Friday! Lets start off the day with another awesome Kidrobot blog by or good friend Chris Holt aka The Toy Viking!

For this week’s Throwback Thursday I feel it is more than appropriate to celebrate the arrival of spring with Amanda Visell’s Buck Wethers Dunny.  After being besieged by a winter that would seemingly never end, we have finally been given some hope.  The snow is melting, the birds have returned from their extended vacation, and I am ready to do some gardening.  My most successful plant by far is my blueberry bush that I’ve had for three years.  In that three years I’ve only gotten to eat one blueberry before the squirrels snatched them all up, so I guess the word “successful” might be misleading.  I’m just happy I’ve been able to keep it alive in the first place and also that they don’t prosecute for plant murder in the state I live.  I’m too pretty to do time.

Looking at Buck Wethers makes me think I’ve been approaching this horticulture business all wrong.  I’m thinking the real secret is owning a pair of overalls.  Just the sight of someone in them probably makes the plants think you know what you’re doing and gives them that little bit of hope they need to thrive under adverse conditions.  They’ll think that my forgetting to water them is for their benefit, and that the cat who comes along and uses their container as a urinal does so to ensure a bountiful harvest.  Overalls really are the most trustworthy of all clothing.  Unlike tank tops.  No one’s ever instilled confidence while wearing a tank top.

You can add this eight inch Dunny to your collection just in time for planting season by visiting www.kidrobot.com.