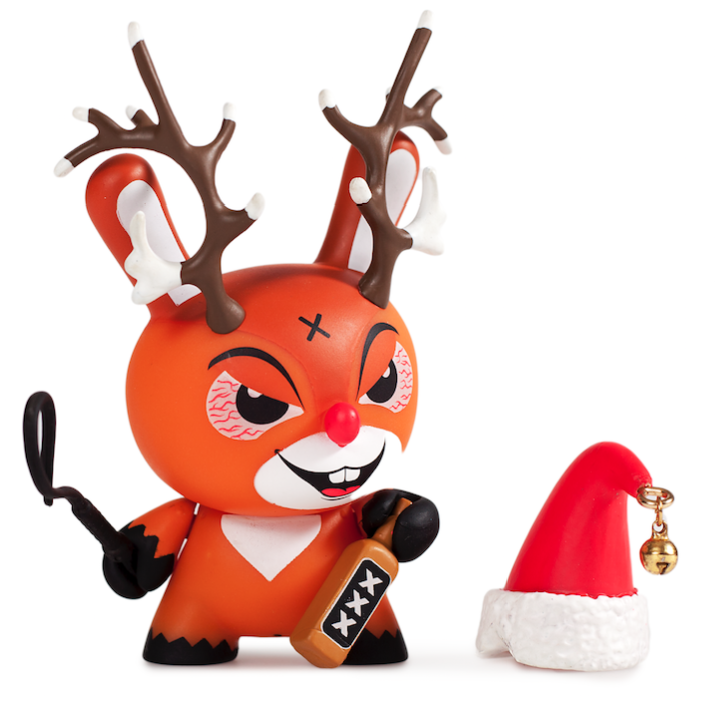 Chris Holt AKA the Toy Viking is here to tell the tale of the new Frank Kozik Rise of Rudolph 3inch Dunny on www.kidrobot.com!

Gather round the tree one and all and let your old Uncle Chris and Kidrobot tell you a Christmas tale that you’ll hear nowhere else.  We call it Reindeer Games 3: Rudolph’s Revenge, and it goes a little something like this:

One day, shortly before their annual Christmas run, Rudolph and his fellow reindeer were practicing for the big run.   Santa was being especially harsh on them that day, making them repeat their take offs and landings over and over until he was satisfied they got them right.  It was exhausting work and his lack of positive reinforcement really started to wear on Rudolph.  When the day was over and all the reindeer were ready to go home and relax, Santa informed them that since he wasn’t thrilled with their effort that  they would get an hour break and then have to come back and work into the night.  Needless to say this didn’t go over so well and Rudolph stormed into their locker room throwing his jingle bells against the wall and using language they bleep out on basic cable.  He pulled a bottle of liquid courage from his cubby  and the more he sipped the madder he got.  He was tired of being disrespected and unappreciated.  Once he was the great hero of Christmas and now he was treated almost as badly as those toy elves in the factory (Santa doesn’t even match their 401k contributions).  As the last drop entered his belly the rage he felt had begun to boil.  He was going to confront his oppressor.  He was going to confront Santa Claus.

The trek across North Pole Inc. to the big office seemed especially long that night as he mulled over every injustice he ever faced.  Unpaid overtime, not even so much as a “thank you” at the end of the Christmas run.  Everyone knew the reindeer did all the work and were the only reason anything got delivered in the first place.  By the time he was outside Santa’s door he was visibly shaking from hooves to antlers.  He was about to knock, ready to air his grievances, when he heard Santa’s voice.  He was talking to someone on the phone and said that the only reason he hasn’t upgraded his sleigh to something jet powered was because “the kids sing that stupid song about those filthy creature so I have to keep them around or it would be bad PR”.

Now everyone, this is what we would call the straw that broke the reindeer’s back.

Rudolph used all of his might and broke the door down with a “thud”.  Santa was shocked at such a brazen display of insolence but before he could say anything Rudolph was a top him in a blur of punches and kicks.  Santa never saw it coming, and his two black eyes wouldn’t let him see much for awhile.   But this wasn’t enough, Rudolph thought.  He needed to be punished in full view of everyone at the North Pole.

All of the other reindeer were heading back to the practice track as they heard a great commotion.  The familiar sounds of bells grew louder , as did a crack as loud as thunder and a painful groan to match.  And then they saw something they couldn’t have dreamt in their tiny reindeer minds.  Santa’s sleigh came into view, only the one holding the reins and cracking the whip was Rudolph and Santa was on all fours, bit in mouth, and pulling it as fast as his enlarged heart would allow.  His normally rosy cheeks were showing the first signs of frost bite by the time the elves came out, prompted by the laughter of their four legged coworkers.  Many selfies were taken, and it was all the WiFi could do to stay up as a plethora of photos were uploaded to Instagram.  And was Santa finally released after consenting to the demands of the newly formed North Pole Workers Union? Did Rudolph let his status as a two time folk hero go to his head on a Kanye-like level?  And where was Mrs. Claus the whole time this was taking place?  Well friends, that is a story for another day.

But while you wait for the next installment, how about you add this special three inch Dunny to your collection. Designed by Frank Kozik, he’ll be available starting today, November 4th to beat you about the head with Yule tide cheer, or something. 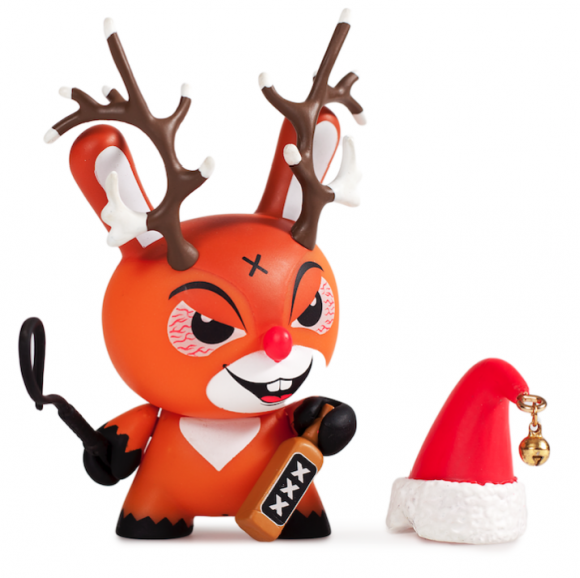