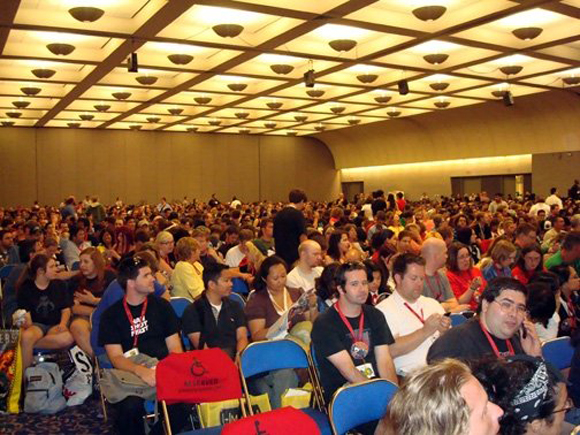 Before the Kidrobot ultimate guide to SDCC 2013  exclusives, signings, and all things nerd-tacular, Kidrobot brings you some veteran tips on how to attend Comic-Con panels like an pro.

*You really can’t predict how early you have to line up for a panel, but it as a general rule, go early. If it is going to be a big movie or TV show, go very early. Sometimes people camp overnight and sometimes getting in line 4 hours early will do the trick. The Big Big Big things are in Hall H usually and this year they are finally going to put TV shows there since so many people want to see. Every year is different, and like we said, you can’t predict.

*Panels do not clear the room when they are done. Some people might stay in a room all day just to see one panel. Basically, you have to just plan. For Example, Every year I attend the 3 panels before Mythbusters to ensure I get into Mythbusters. Once a panel is over, you can move seats very easily if you want to get closer. Also an aisle seat is your friend, since you can utilize an electrical outlet nearby to charge the ever needed phone.

*You may have to wait outside for a long time. Bring sunscreen, games, phones, water, and comfy shoes. Since most of the panel rooms have wifi that extends to the lines, you can blog away about interesting folks you see in the line or maybe keep up with great secret releases. FYI in 2012, I got in the Hall H line at 6am for the Hobbit panel at 1pm.

*Just because they cut the line off doesn’t always mean you will not get in. People leave a lot and then security will let more in.

*Movies and television typically will show pilots and new footage of their upcoming feature. This is good for getting a glimpse of a new TV show for the fall or what you can expect in the future of film. I think this is common sense, but they don’t like people videotaping things they show.

*Also for film and television, the cast, producers, and writers usually attend. This is where you may get the chance to ask that hard hitting question you have longed to get answered. This is also annoying because you will always hear people ask an actor for a hug or how they liked playing a character in a film made in 1992 (which is all frowned upon). DO NOT BE THAT GUY/GIRL.

*Get close to the front if you can. Why? Well they hand out tickets for free swag you obtain in the fulfillment room. The free goods can range from a shirt to a tote to a drink holder. They also typically hand out more tickets than they have free goods by the way. The free stuff can be obtained in the Marriott next door the past two years, and usually the people there are kind of grumpy.

*Also watch out for bum rushing the stage once the panel is over. I just recently found out it is a huge fan boy thing to grab the name placard from the table of the attending celebs.

*Security is just doing their job and most of the time it is a volunteer that really doesn’t know what is going on. Give them the benefit of the doubt, and they can help you know where the bathrooms are.