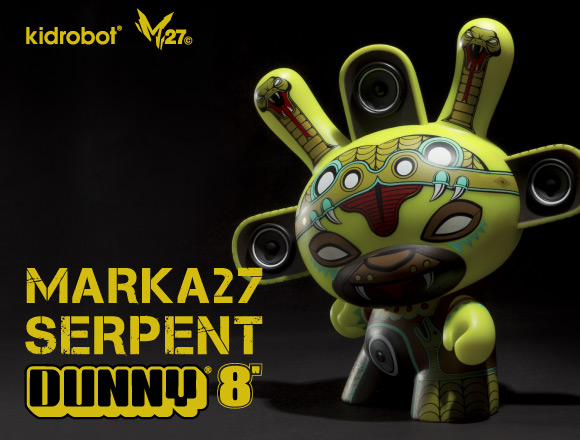 Powerful ancient gods and contemporary musical forces mix it up in the new Shadow Serpent 8-inch Dunny by Marka27, blending an iconic platform with Marka’s popular mini-god aesthetic.  Bright green and adorned with slithering serpents and native markings, Shadow Serpent bears 3 decorative mini-speakers sculpted into the head, and a printed speaker on both the back and belly. The serpent influence comes from Marka’s Mexican heritage, pulling inspiration from the ancient god Quetzalcoatl, a feathered serpent deity worshipped by the Mayans, Aztecs and other indigenous cultures.  The chase (1 in 6) is an equally stunning black, with white and pink graphics. Limited to 1,500 pieces worldwide and available beginning April 21 for $70.00 (£64.40 UK; 70€ Europe) in Kidrobot stores, kidrobot.com and specialty retailers.