KING OF THE BOARDS – Leecifer 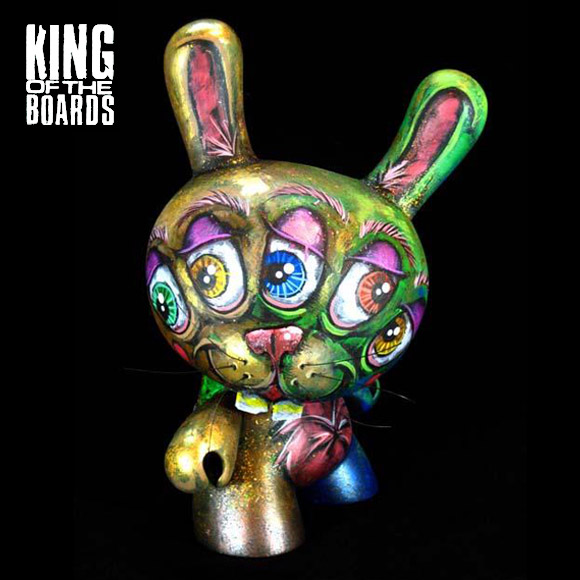 The Kidrobot Forums is a melting pot of talent, pumping the life blood of the vinyl community. The KRonikle is proud to present KING OF THE BOARDS, an artist custom contest that arbitrarily spotlights one of the accomplished members on the KR discussion boards for their inspiration and dedication to the vinyl art community. Enter to win the specially customized 8-inch Dunny, 5 Eyed Happiness by Leecifer. Email wheelbarrow@kidrobot.com with the names of your 3 favorite toys of all time. The drawing will take place on July 8.

This month’s KING OF THE BOARDS is Leecifer. Hailing from Oakland Hills in Northern California. Leecifer’s characteristic brushwork and brilliant grasp of characters enlivens a spirit all of its own, no matter what the platform. From curating to customizing, Leecifer is a man of many talents. We sat down for a chat with Lee to see what’s up.

KR: How long have you been a board member?

L: The control panel says October 31,2005! But I think I followed Kozik over from gigposters.com early in 2004?

L: As a kid in the 70’s I’d cut off the arms, legs, and heads off my little plastic army men and use a Bunsen burner to make my own multi-armed or double headed mutant soldiers.  Then when Star Wars came out, I started crashing model kits together to make my own space ships and creatures.  I didn’t, however, touch a piece of designer vinyl until I got to check out Kozik’s pad. I remember I had my poster portfolio w/ me and Frank was really patient and gracious.  It was really hard to pay attention though w/ all those toys everywhere as I just wanted to run around and touch everything.  I got to check out some prototypes and I believe he was customizing a few things there as well.  Anyhow I went home totally inspired, hit e-bay and went to town.
I’ve been doing the toy thing for awhile now. Previously I had been an art director with the phone company for 15 years. So my wife and I used to buy art from local emerging SF artists as we wished. Now being self employed (read broke ass poor) we found we could still afford the vinyl toys these folks had begun producing. Places like Strangeco (one of my all time favorite toy companys and the reason I first went to KR!!!) had deep local SF talent involved in making AMAZING toys. It was so cool to hold a 3d version of a character from an artist/painting we admired. And like any good graf rat (actually I really wasn’t) and aging punk (I was) it quickly led to unauthorized collaboration. I think it was about that same time (still 2004ish) I discovered there were also places like Kimono My House, Super7 and of course Kidrobot! Funny thing about Super7 is, while I’d been to Kidrobot a ton of times (I used to buy Super7 there) I had been reading the (Super7) magazines long before I even found out there was a physical brick and mortar place that held all this crazy goodness for sale!! Tactile sculpted toys from Japanese monster movies I watched as a kid!?!?! Oh man how do you pass that stuff up. Painting toys actually got me back into galleries so it sorta went full circle.

L: I think the bulk of my influences would be more along the lines of modern Illustrators. Folks like Brad Holland, C. F. Payne, Anita Kunz, Brian Ajhar, Bob Conge (yup same toy dude), Peter de Seve, Marshall Arisman, Murray Tinkleman (think Jeremy Fish 30+ yrs ago), Matt Mahurin, Arthur Rackham, ok so not so recent w/ that guy, but you get the idea.

L: First toy customized? Well besides the previously mentioned army men and spaceships I made a few e-bay purchases of Bounty Hunter stuff and then started in on the Kidrobot and Strangeco products.
The first custom art show I was in was The Funny Club Club show in 2004 I believe. As I stated I had also discovered Kid Robot by this time and had been buying product nonstop so when I turned my funny club fig into a big spider I chopped up a bunch of series 1 Dunnys as victims. I ended up tossing the dead Dunnys in favor of one cast out of resin that was better looking when it had its eyes drilled out. I think I went through a few cases of that first series of Dunnys (sigh)! We had a few almost full sets, but never could find that damn silver one!!! Hahaha. Man I wish I still had all the ones I jacked up .

L: Well the year got off to a bang as I curated It Came from SkullBrain II for Super7 SF, the 5-Eyed Dragon (with myself, SouthernDrawl, Betso, DrilOne, and Brent Nolasco) for Joanne and Ray of Dragatomi in Sacramento, and then the Not Vinyl Show (again for Dragatomi). There was the 2-man show with Josh “Vampire Rose” Herbolsheimer for Super7 Florida and I got to participate in Monster in the Mangroves again with S7 Florida. Also the Sketchbot Show, a Harrold & Ted collaboration with Blamo Toys for WonderCon, the Qee Aniversary Show, Mr. Power Show at Toycube, Super7 Lucky bag pieces, Yoka Show at Genuine Artikle, Marshall custom blind box project. Celsius Show curated by Spanky Stokes for TAG and Crazy for Cult Show at Gallery 1988. I’ve a solo show at Super7 SF July 10 and then lots of stuff with Dragatomi for SDCC and then later in the year a couple great projects with Super7 SF again. Also a page or two in the Paul Budnitz’s book I Am Plastic Too when that drops. Finishing up leecifer.com (go check it) I’m sure I’m missing a bunch o’ stuff, but you get the idea.
And, of course, finally and thankfully there are a ton of commission projects in there and many more to go!  These are the souls that keep me eating and living indoors and keep me constantly challenged and working. It’s to this support that I say – from the bottom of my heart, thank you very very much for all the commissions and gallery purchases. I am flattered and honored!!!

Congratulations to J.C. You are the winner of 5 Eyed Happiness. J.C.’s favorite toys are Legos, Green Plastic Army Men and Matchbox Cars.

The post KING OF THE BOARDS – Leecifer appeared first on Kidrobot Blog.