translation missing: en.general.accessibility.skip_to_content
Home News From Paper to Plastic – How a Toy Gets Made

From Paper to Plastic – How a Toy Gets Made

The week before the release of the Pure Trance mini series by Junko Mizuno, I sat down with the most incredible toy-makers on the planet, Senior Graphic Designer Alex, Toy Production Manager Delphine and Toy Production Assistant Julie to ask them how they channel the creative energies of world-famed artists into the uncompromising designs that become Kidrobot toys.

Mike: So how is a toy born?

Alex: First, Joanna on our team will approach the artist and ask them if they’d like to work with us on a toy. If they are interested, they’ll work on a bunch of character ideas, sometimes these are existing characters. The Pure Trance toy was inspired by Junko’s manga work. But more often than not, the character does not exist when we start. 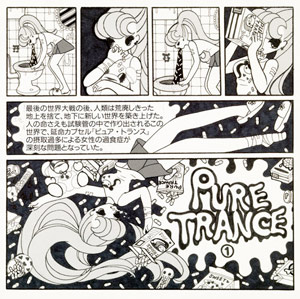 Delphine: There’s a whole creative process at the very beginning where we go back and forth with the artist and develop the concept of the toy together. At a certain point, we’ll have a good idea of what the toy or mini series is going to look like, as more final artwork is developed. That’s when Alex gets involved to choose specific colors and start looking at turn-arounds.

Alex: And then I’ll get to the bottom of all details…

Alex: There are a lot of decisions to be made. Like, are the eyes raised or engraved? What articulates and not? Which accessories are removable and which are fixed? Sometimes the artists provide this kind of detail, but not always.

Delphine: Yeah, I never really thought about it this way, but Alex really is the first production step. The artists are usually thinking in terms of illustration.

Julie: Lots of times the front and side views don’t match, or the illustrations are actually impossible to make into an object!

Alex: So basically, my job is to think like the factory. What’s missing? What questions are they going to have? Sometimes I’ll do rough turn-arounds, you know, draw the toy from the back, side, top and bottom. And then I’ll check colors to make sure the contrast is right. At this stage we’ll ask lots and lots of questions of the artists. Depending on the artist, they’ll either have very specific opinions, or some of them will just trust us. 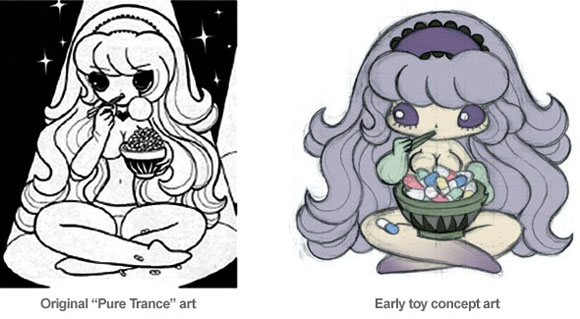 Alex: So once I’ve done my round of work, I’ll pass it to Delphine, and she’ll have more in-depth questions, things I didn’t think of that the factory is going to want to know.

Mike: But at this stage, it’s still all 2D artwork, right?

Alex: Yeah. Then we send it out to one of our factories, and they play a huge part. Their sculptors are incredible artists.

Mike: At the stage when you leap into the third dimension, are there discoveries made about the toy? 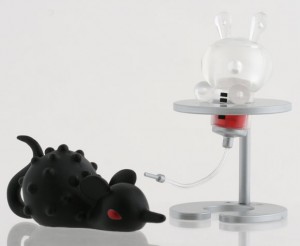 Alex: Absolutely. The blood bag accessory in this Junko series is a great example. In the 2D world, it didn’t need this stand, but it was illustrated standing up, so we looked for 3D solutions.

Delphine: Plus, we’ll push what’s possible with materials. As it was originally conceived, the blood was red paint on the outside, but we thought it would look a lot more real if we used transparent red plastic. We used the same technique for the snake’s bottle that comes with The Lady from Maruyama.

Mike: Yeah, it looks great. I guess that’s what happens when you know how to make toys.

Delphine: Ha! It’s true! It helps that we have so many people looking at it. When we get to the sculpt stage, everyone sees them. It starts with Julie, but Alex and I and Paul all see them. The artists too. We’re all very detail oriented.

Julie: Some clays make their way through the process very quickly and the factory gets it right in the first round or two. Others require more work. It’s often due to how detailed we were able to be before we handed it off to the factory.

Mike: So they actually sculpt the toy out of clay?

Julie: Yeah. They use the artwork we send them and they sculpt it and send us images of their clays from each angle. I’m the first person to write up feedback, but then I send that along to Alex and then the artist. We gather all the feedback and send it back to the factory and they make the changes and we go through the whole thing again.

Julie: Some toys take longer to get right than others.

Mike: So at this stage, you still haven’t actually held a 3D object in your hands, right?

Julie: That doesn’t happen until pretty far in the process.

Mike: After months of working off of photographs, do you ever get the actual prototype in your hands and say, WTF?!?

Alex: Yeah. It definitely happens. Especially with zipper pulls. They’re so tiny, it’s easy to forget that you’re scrutinizing a big high rez photo. You sort of lose your sense of scale.

Mike: How do you know when a toy is right?

Julie: Each round, the number of comments you have for the factory is half as many as the round before. So eventually you get to a point when you just say, do these two things, and it’s good! 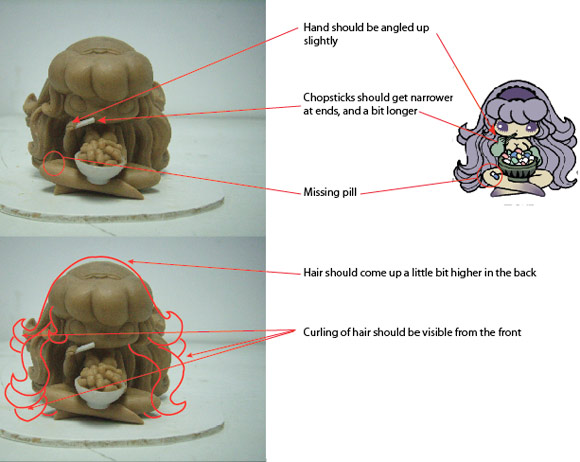 Alex: Experience helps. We’re better at doing this now than we used to be. Just because the sculpts match the art, doesn’t mean it’s right. We’re always looking out for how to make the toy better throughout the process.

Delphine: Ok, so then, once we’ve approved the prototype, they tool the molds, which are basically the two halves of metal that the plastic is poured into. This part takes a while.

Julie: And the molds don’t actually look like the toy anyway. They have to split the toy apart into pieces, and then put it back together again at the end. Sometimes the factory comes back with changes at this stage because we’re asking them to do something that’s physically impossible using the production methods available.

Alex: Like, you wouldn’t be able to actually get it out of the mold.

Delphine: Yeah, this toy is injection mold cast. A Dunny, on the other hand is rotocast. Basically, they put hot soft vinyl in a Dunny head shaped cavity and spin it around in every direction and the hot vinyl flies out to the edges and cools there. Once it’s set, but still warm, you can actually pull it out of the mold through, say the neck hole because the soft vinyl is hollow and very flexible when warm. Injection molds are basically made like two halves of a walnut shell. They lock together, and the plastic is injected into a hole, where it fills the entire cavity. Once set, the two halves of the mold come apart and the pieces drops out.

Mike: How was working with Junko?

Julie: She’s awesome, and so excited about seeing her toys come to life. She was very specific about certain things, but also trusted us on other decisions.

Mike: How does the intensity of the development for a mini series differ from that of say, and 8-inch Dunny?

Julie: And when you’re working on a Dunny series, one of the challenges is that you’re working with so many artists, each with their own communication style. Each toy is rewarding in its own way. I love getting the first round of prototypes in and lining them up on my desk!

Alex: Yeah, that’s great. Two of the things that we always strive to do with a mini figure series is make them feel like a family and make them all equally excellent. So the first one is about consistency. They all need to be of consistent scale, if the eyes are raised on one, the eyes should all be treated that way unless there’s a good reason to break that rule. And the second point, we want to make sure that when you open your blind box, even if you don’t get the toy you were hoping for, you’re still really happy.

Working with artists is the best part. Especially when you’re getting to realize their art in 3D for the first time ever.

Julie: Yeah. And it’s exciting for the artists too.

Alex: I still get excited every time I open a final production blind box!

Check out the Pure Trance Mini Series and other Junko Mizuno gear at kidrobot.com!

The post From Paper to Plastic – How a Toy Gets Made appeared first on Kidrobot Blog.