A look at Mark Dean Veca 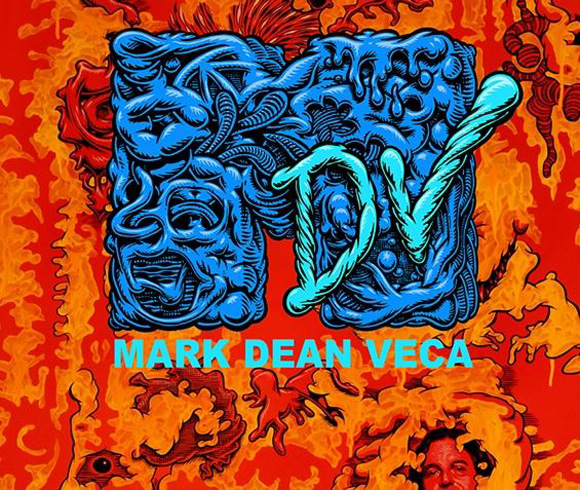 If you haven’t noticed in the past, we love Altadena, CA based artist Mark Dean Veca with his visually stunning style of infusing graffiti, llustration, and design within a pop culture bubble. The question is, do you know much about Mark Dean Veca?

Mark Dean Veca is a purveyor of prehistoric magic: creating space on a two-dimensional plane with a few lines of charcoal, ink, or paint. He draws on paper, canvas or walls and uses simple black lines to manifest volume, space, and depth. He shares his illusionary worlds and characters to express the internal and external tension of the human condition as he experiences it. His work is visceral, carnal, with its depictions of organs and orifices and writhing tendons, arteries, and intestines. It is comic and unnerving with strong contrasting palettes and patterns and odd juxtapositions of historical and popular iconography often abbreviated, disfigured, or exposed. Whether large or small the work is intentionally spectacular and the artist wholeheartedly embraces his constructive affliction of horror vacui.

Veca was born in Shreveport, Louisiana in 1963 and grew up in the bedroom community of Livermore, California. (2) The suburb is 40 miles east of San Francisco, the epicenter of the Summer of Love, and a hotbed of underground comics during the late sixties and seventies. Publications like Zap!, Slow Death Funnies, and the Fabulous Furry Freak Brothers were being published out of the Bay Area and made their way into the hands of teenagers and young adults across America along with Mad Magazine out of New York. Comic books (under or above ground), newspaper comics, animated cartoons, feature films, and advertising have long inspired young people to seek out the visual arts, and Veca was no exception. He was compelled to draw and at an early age knew he wanted to be an artist.

In 1981, Veca arrived in Los Angeles to attend Otis Art Institute (now Otis College of Art and Design). His plan was to be an illustrator but he was quickly persuaded by his professor, artist Jill Geigerich, to pursue the Fine Arts track and study painting. His teachers included Jim Morphesis, John Mandel, Arnold Mesches, Mike Kelly, Roy Dowell, Scott Greiger and Kent Twitchell. Ultimately, it was Twitchell’s drawing class that profoundly shaped the direction of Veca’s work. Apprenticing on an actual mural, Freeway Artists Running Team (1983-84), located on the Hollywood Freeway—a precursor to those commissioned for the 1984 Olympics—Twitchell taught a select group of four students how to break down a photographic image by hand, enlarge it and transfer it to a wall.

After graduating in 1985, Veca worked in Los Angeles for a few years and then decided to make his way East to New York City. To support himself, he started a successful candle making business. This allowed him the flexibility to build a strong portfolio of drawings and paintings that eventually led to a pivotal project at the Drawing Center entitled Wall Drawing ’96 featuring artists Tania Mouraud, Barry McGee and Mark Dean Veca. Director Ann Philbin asked each artist to create a temporary mural to be painted directly on the gallery’s walls. Veca, thankful for the time he spent with Twitchell painting on the side of the Hollywood Freeway, knew exactly what to do.

Veca has a deep-rooted fascination with the depression-era character Popeye. Originally created in 1929 by E.C. Seegar for the New York Journal’s Thimble Theater, the Sailor is an all American icon that represents a gruff, scrappy, working man, who knows when he is wrong, right, and when to fight. For the Drawing Center, Veca appropriated, detached, and reanimated Popeye’s signature muscled arm and iconic sailor’s cap to create a new protagonist for his epic mural Canto III (1996). According to Sarah Schmerler for Time Out New York, “In Canto III, wave upon wave of what looks like Popeye’s disembodied forearm and fist (wearing his hat) march over a blasted plain to meet arch-enemy Bluto’s teeth, likewise disconnected and endlessly repeated. Out of this latter mass, forked tongues flicker here and there, underscoring a primordial cartoon battle between good and evil.” (3) This representation of warring parties, opposites, or opposing motion, action or energy, set up a persistent duality in Veca’s oeuvre.

From the catalog essay Phantasmagoria 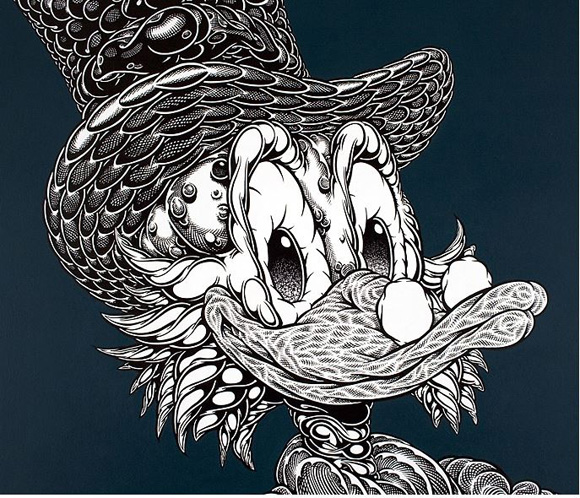 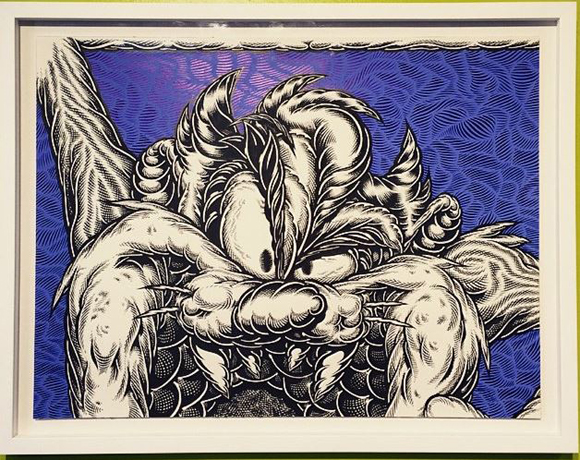 For more on Mark Dean veca, please visit his site here. Maybe we will see more from him soon.

The post A look at Mark Dean Veca appeared first on Kidrobot Blog.