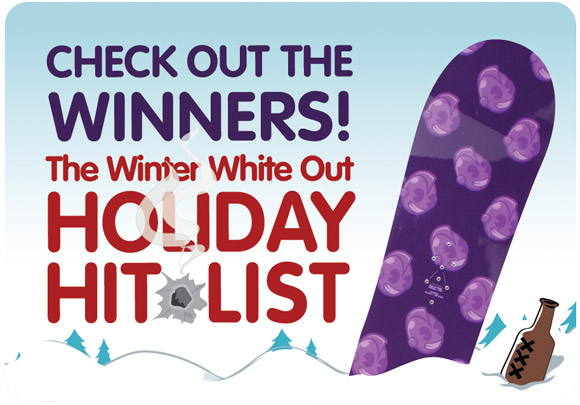 Kidrobot would like to give a huge round of applause and a very big thank you to all the contestants for making this year’s seasonal contest so much fun and creative. There were almost 3 dozen incredible entries which made choosing a winner quite difficult. With 3 Kidrobot x Burton snowboards and a full set of Dunny Series 2 the competition was intense. The submissions are in, the votes have been tallied and Kidrobot is proud to present the grand prize winners for The Winter White Out Holiday Hit List.

“The five (5!!!!!) holiday backgrounds make this a uber-Festive Five-fer. LOVE the iPhone carol-canon, followed by the iPad autotune remix – straight cold pimpin’ deserves a superfly ride. Throw in the flashback hands, with a little toot-toot at the end, and you win, Adam.”

“A worse performance couldn’t have been pulled off any better. Way to pour your heart and soul into this one Mike. A perfect example of Best Worst Performance.”

“Power to the People!”

“Epic epicnessl! The brilliant blend of twisted creativity, old timey originality and festive lyrics rewritten Kidrobot style really set this video above all others by leaps and bounds. Bravo!”