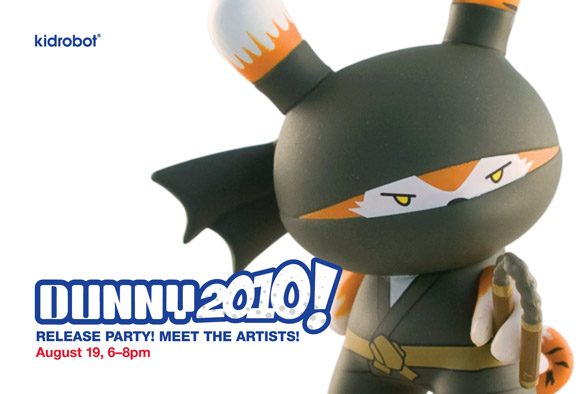 The zero hour is approaching! Dunny Series 2010 is a week away and Kidrobot is celebrating the explosive launch with artists appearances and exclusive goodies at Kidrobot stores. On Thursday, August 19 from 6-8 pm (in respective time zones), we will host numerous artists from DS 2010 in 4 0f our 5 Kidrobot locations. In San Francsico you can bro down with Huck Gee, Frank Kozik and Jesse Hernandez. Visit our New York store in SoHo and say hi to Aya Kakeda and Travis Cane. Meet the lovely ladies, Esther Kim, Michelle Valigura and Amanda Visell at our Los Angeles location. And hob nob with Triclops Studios in our London store.

There will be an exclusive DS 2010 tote bag and super-limited Sket One Relish Dunny with case purchases, while supplies last. Hit up our world wide launch party map to find the closest participating location.