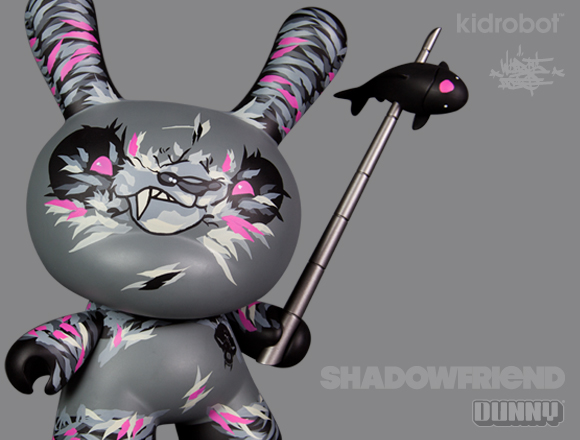 Shadow Friend is the perfect playmate. He follows you wherever you go, playing right along. As a backwards twin to the original Woes design by Angry Woebots, Shadow Friend takes all of the gushy, “I heart you” feelings associated with mammoth cuddle monsters, and replaces them with an awkward nervous fear.
Inspired by his 3-inch 2Tone Dunny, this is a darker version of his iconic stressed out giant panda. Showing off its latest catch of speared fish, the 8-inch Shadow Friend Dunny intimidates with hot pink beady eyes and a one-fanged snarl. Representing the number of Giant Pandas left in the wild, 1000 Deep is printed on the back of Dunny’s head, and black skull printed on its chest, a symbol of the species struggle to stay alive. Like their fuzzy counterparts, Shadow Friend Dunnys have limited numbers – only 1250 are available. December 6 you can see them in their natural habitat at Kidrobot stores, kidrobot.com, and select retailers. Shadow Friend retails for $75 US (£60 UK, €69.60 EU).