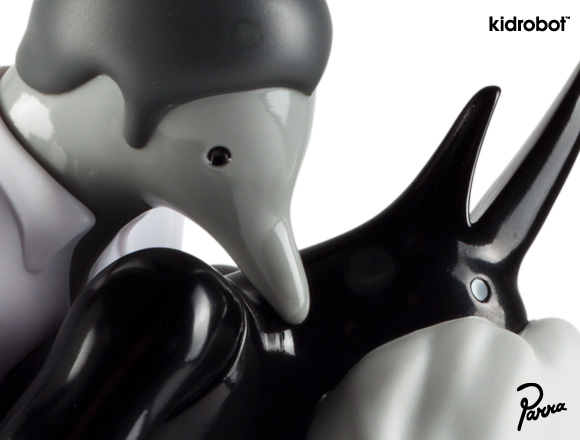 Dutch artist Parra presents his second edition of Pierced, turning the bright hues of the original art to muted shades of grey. The contrasting matte and high gloss 10-inch tall vinyl sculpture has no front or back, telling its story in the round, depicting two figures entwined and suspended in a dramatic dance of passion and pain. A fiery embrace between two lovers, one clothed and one nude, changes from an ecstatic and intimate moment to an impaling brutal display of empowerment.
Produced as a limited edition of 750 with artist’s signature engraved on the bottom, Pierced: Shades of Grey becomes available for $150 US (£120 UK, €139.20 EU) on January 31 at Kidrobot stores, kidrobot.com, and select retailers worldwide.