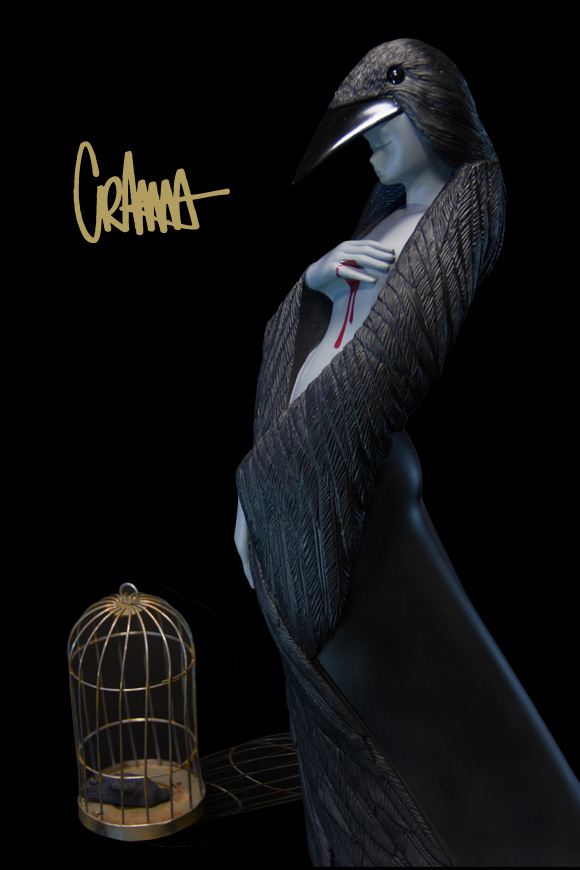 Melancholic beauty and death cloaked in feathers. A headdress with shiny black eyes and sharp beak is mounted over petite downcast features. Massive hands hold the delicate chest. Bright, shining red escapes through the pointed digits – a sign of life in a sea of black.

In the aftermath of an unknown event stands a 12-inch vinyl statuette. A lost life in a small metal cage lies at her feet with no explanation given.

Limited edition of 200 pieces, each is hand numbered with the artist’s engraved signature on the bottom.

Murder makes its deathly appearance on October 24 and retails for $399.99.

Self taught artist and habitual doodler, Craww plies his trade from the fair city of Sheffield, drawing inspiration from daydreams, music, comics, nature, gin and an overactive imagination, Often starting in one place and ending up in another, his work poses questions but seldom answers them. It’s direction influenced as much by accident and a short attention span as design, Craww enjoys seeing his creations taking on a life of their own as he paints.

Craww likes ambiguity and his work explores his fascination with things that aren’t quite what they seem. Pretty things in dark places, nasty surprises masquerading in beauty, hidden stories and happy accidents, brought to life with a mix of elegance, balance and disciplined chaos. His work is a story without an end – a stream of consciousness ramble through the woods, populated with skulls, crows and melancholic girls with big hands. Learn more about Craww here.