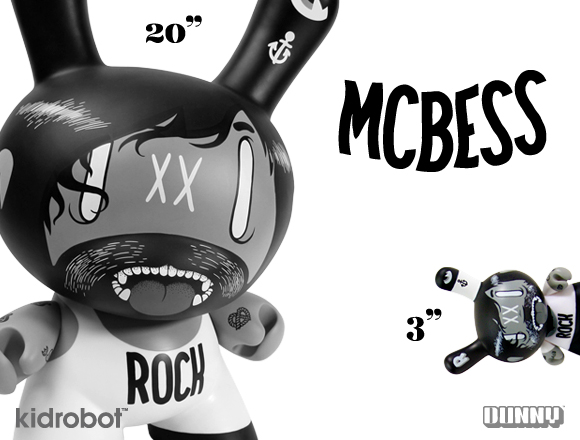 Melding the passions of French artist McBess, Le Dead Plastique is a black and white punch in the face. The 20-inch rock’n’roll incarnate is tatted up with a mesh of music, marauders, and meat paying special homage to dead pirates and pretzels.

What inspired this design?

I wanted to make this like an extension of my illustrations, simple black and white / rock and roll character, with big bold text on him, something with a lot of impact like a punch on the cheek.

Is there any significance to your band, The Dead Pirates, rock, roll or your meat iconography?

Of course, this is all a big meat-pie, this toy is summing up everything that I do, the band, the drawings, the food…this should be like a icon for what I do.

Is it post-modern rock and roll?

Well I listen to a lot of different type of rock but the main veins are 70’s, stoner and psychedelic rock’n’roll, but overall it’s link to the music that I love to do because of it’s simplicity and contrast. I see him as the incarnation of rock’n’roll itself

Vinyl is dead May 9 at Kidrobot stores, kidrobot.com, and select retailers. Limited to 300 worldwide. Each 20-inch Dunny retails for $399.99 US