KING OF THE BOARDS – J*RYU 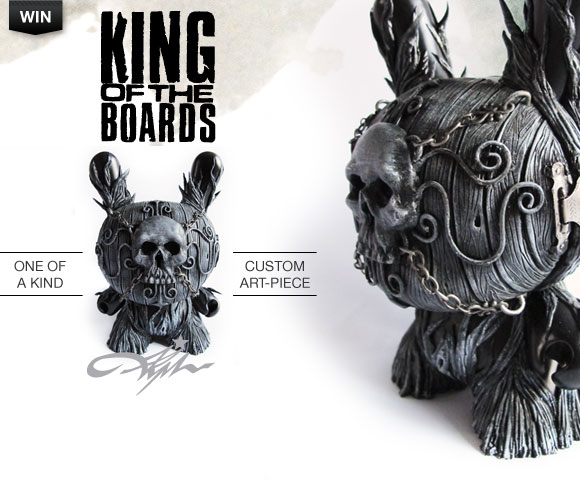 Jennifer V. from Tustin, CA is the proud new owner of the highly sought after custom 8-inch Sanctum Dunny.
Rob L. aka smack6102 of New Jersey is the lucky Twitter follower who will be adding the mysterious 3-inch Dunny to his vinyl collection.

Both winners will be contacted by Kidrobot. Big thanks to everyone who participated, retweeted, followed and blogged about this amazing custom Dunny by J*RYU. Until next time…

Welcome to Kidrobot’s Forums artist custom giveaway, KING OF THE BOARDS. This unique contest arbitrarily shines the spotlight on one of the many insanely talented customizers and outstanding members of the vinyl community, and hooking you up with a chance to score this exclusive hand-crafted 8-inch Dunny by J*RYU. To enter you must find the secret title of this toy on J*RYU’s Twitter steam and email this Dunny’s name and where you are from to wheelbarrow@kidrobot.com by next Thursday, January 26 at 6pm EST. As an added bonus, Twitter addicts must Follow Kidrobot & J*RYU and Retweet the hashtagged name of the Dunny to be in the running to win a mysterious custom 3-inch Dunny. Only the lucky winner will be able to see the secret display in side the head.

North Carolina native, J*RYU (pronounced jay-ROO) aka Purdy Supremacy is the gentleman ghost of international art crew, Army Of Snipers. Over the past few years, J*RYU has tantalized the art & toy community with his dark and melodic sculptures, customs and paintings. Whether on a platform or an original sculpt, this muli-talented artist and traveler never ceases to impress. We caught up with J*RYU and got to the heart of the matter…

KR: What’s up J*RYU! How long have you been a board member and why did you join?

J: I joined the Kidrobot forums in 2006 after buying my first blind box Dunnys from a local shop here in North Carolina. I had previously seen Labbits and thought that they were interesting but it wasn’t until I caught blind box fever that I decided to take the plunge and dive into the madness that is vinyl toy collecting. These days I haven’t been as active on the boards because of my schedule and projects but I still lurk here and there and keep up with what’s going on in the scene.

J: My background is graphic design/business intelligence and I had been ensconced in the corporate world for about 13 years without doing any type of practical art, despite the fact that I had already been making little figures and sculptures out of polymer clay starting back in 1992. Having been a serious toy enthusiast since I was young, toys were already such a large part of my life for so long but I was always very practical about the idea, because my day job took precedence After, I joined the KR boards and met a lot of different customizers like Drilone, Reactor-88, Leecifer, Jeremiah Ketner, Lou Pimentel and more, I was truly inspired by what these artists were doing. Then in 2009, I went crazy from stresses in my professional and personal life and needed an outlet to help me work out all that turmoil so I took the plunge and did my first public custom, a 2.5″ Qee. I absolutely loved it and getting back into art really provided me with the balance that I had been lacking for so long. It’s been a roller coaster ever since. 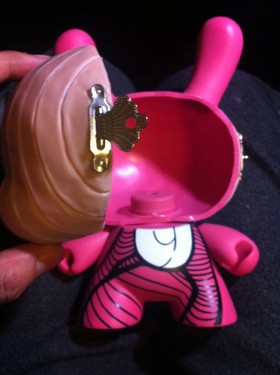 KR: Who are your favorite artists and/or biggest influences?

J: It’s hard to name my favorite artists as there are way too many to list and I can always find something to appreciate about everyone’s work that gets me stoked as a fan as well as a peer. As for influences, my upbringing in suburban North Carolina wasn’t exactly rife with a lot of the street art movement/graffiti/distilled shapes etc that are common elements found in many contemporary toys within the scene. A lot of the things that resonated with me as a child were comics, myths, fairy tales and old school anime as well as exploring the woods and creeks around my parent’s house. My influences artistically skew towards artists that have emotive and narrative elements and I try to convey these things in my own work. I really admire artists like Edward Gorey, Tim Burton, Hayao Miyazaki, Ray Harryhausen, Shigeru Miyamoto, Jim Henson, etc. because their works are timeless and inspiring.

KR: What was your first Vinyl toy?

J: My absolute first vinyl toy(s) was a set of Japanese Spiderman/Leopaldon figures from Japan. My first western vinyl toy was a 3″ Dunny. I wish I still had that squat, fat Spiderman figure.

KR: What have you been up to recently?

J: I literally just returned a few days ago from a month-and-a-half of being away from home. I was painting and showing at Art Basel early December in Miami and then went straight to LA where myself, Ritzy Periwinkle and Aaron Woes Martin left on a tour of Asia where we represented our crew, the Army of Snipers, through a series of events that took us to 4 different countries. We participated in the Little Lotus Project, a humanitarian project where we worked with Burmese refugee children in Thailand and did benefit events in both Singapore and Philippines with a stop in Hong Kong in between. It was an amazing journey and really gave us a perspective as to how artists are able to enact positive change in the lives of people regardless of where they are in the world. Check out our site, flavors.me/snipersinternational for more on what we did there. Big thanks to Kidrobot for being a premier sponsor of our time in Thailand too, much love for that.

J: I have a few group shows coming up including a dragon-themed show at Dragatomi in February, Nathan Hamill’s Bellicose Bunny show in LA and G40 in Washington DC in March amongst others, as well as helping to arrange a touring show of the artwork from the Little Lotus Project that will hit both coasts sometime this year. I am also excited (and hella nervous) about my debut show which will be happening on September 7th, 2012 at Rotofugi where both myself, and Luke Chueh will be having dual solo openings and showing new work and a tentative collaboration…something. ;) Army of Snipers will also be ramping up with a lot of interesting projects including another possible tour. Lastly I am also planning a cross country move sometime this year from East coast to West coast so I can devote a bit more time to my art and be closer to my beloved art fam. So, not too much going on really, haha. I tentatively have “sleep” penciled in for 2013. Wish me luck.

The post KING OF THE BOARDS – J*RYU appeared first on Kidrobot Blog.