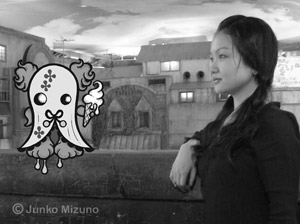 The work of Junko Mizuno is both fascinating and frightening. Her drawing style, which combines the sinister and the sweet, has become a sub-genre of the classic manga movement.

In 1996, Junko Mizuno self-produced a photocopy booklet called MINA animal DX which brought her to the attention of the publishing industry in Japan. Her drawing style, which mixes childish sweetness and cuteness with blood and terror has become a sub-genre of the classic manga movement.

Mizuno’s original designs were highlighted in the BBC’s acclaimed documentary series, Japanorama, and her artwork is frequently featured in gallery shows around the world. Junko Mizuno currently resides in Tokyo where she produces new comics, illustrations, paintings and design products ranging from toys to clothing.