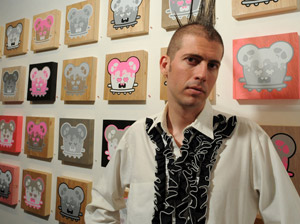 First known for plastering thousands of hand-silkscreened posters throughout Los Angeles and in far-away places, when Buff Monster’s original and only wheat paste brush was no longer usable, seven years of poster missions came to an end. Giving up a very productive street art career, he now works on fine art paintings, collectible toys and select design projects. His artwork has been published in magazines, newspapers and books, and his paintings, which are usually accompanied by large-scale installations, have been shown in numerous galleries around the world. His introduction to vinyl art toys was his 3-inch figure in the LA Dunny Series.

Buff Monster currently lives in Hollywood, CA and cites heavy metal music, ice cream and Japanese culture as major influences. The color pink, as a symbol of confidence, individuality and happiness, is present in everything he creates.