The new Kidrobot exclusive series by Naptime Noah really is all its cracked up to be? Want the inside scoop on the series and the artist before it releases tomorrow on Kidrobot.com..we got it for you….
The 3 inch dunnys are red until you introduce them to 86 degrees or higher. When heated with a blow dryer on low they become a bright neon yellow then slowly start changing back to the original state once they cool off. There are 3 chases in the 3in release including one that is a lighter red mixed with yellow/white that still changes to bright yellow when heated. The other two 3in chase dunnys are mood dunnys.
The 5 inch dunnys are called chameleon dunnys because they change between four different colors when you look at them in different lighting. The colors include gold, yellow, green, and blue with sea foam cracks. When you look at the 5 inch dunnys at one angle they will look one solid color until you change the angle or the lighting. The 5 inch series comes with one mood dunny chase.
The 8 inch dunnys are both mood colorways.
They are green or blue at room temperature with green cracks. But when you introduce cold air (freezer) for 10 seconds they change to black with green cracks. Then when you touch them they change an array of different colors from black to red, yellow, green, then dark blue.
Do not leave the color changing dunnys in the sun for more then 5 minutes at a time because if they are exposed to the sun for long periods of time they will get a sunburn which can stop the color change completely. The 3 inch red to yellow dunnys can also change colors under hot water but I would advise only using a blow dryer to change the colors because water could eventually ruin the paint on the dunnys. DO NOT get the mood dunnys wet because it will ruin them very fast.
1. This series is called Reaction. I wanted to go big for my first release so I decided to use color changing powders for the first time from (solar color dust) The series name “Reaction”
Says it all about these dunnys.
2. My inspiration would have to be the sun and moon. To me the 3 inch red to yellow dunnys resembles the sun to a sunset. While the mood dunnys resemble a colorful night underneath the bright full moon.
3. My favorite design would have to be the mood dunnys because they look amazing and start changing colors a soon as you touch them.
4. The most difficult aspect of this series would definitely have to be filling in all the cracks. It takes a lot of time and patience to be able to fill in each individual crack.
5. I really enjoy painting, skateboarding, snowboarding, dancing, DJing, working out, and collecting.
6. I received my nickname NapTimeNoah in high school because I can literally fall asleep any place any time and in any situation. Another fun fact would be my whole family goes by their middle name. My first name is actually Michael. 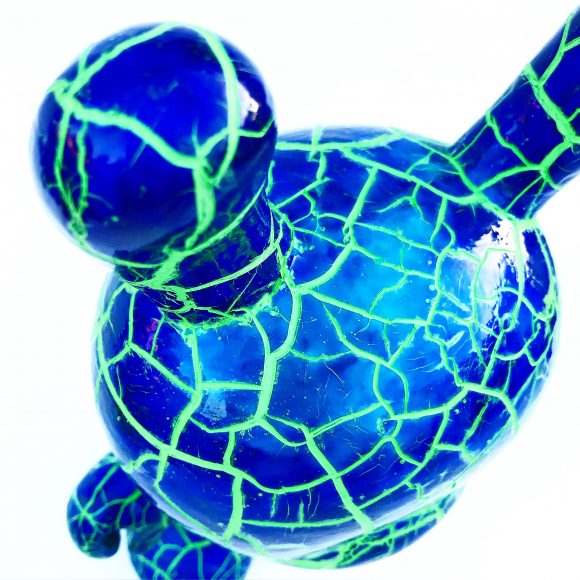 Be sure to check out the rest of Naptime Noah on this page!