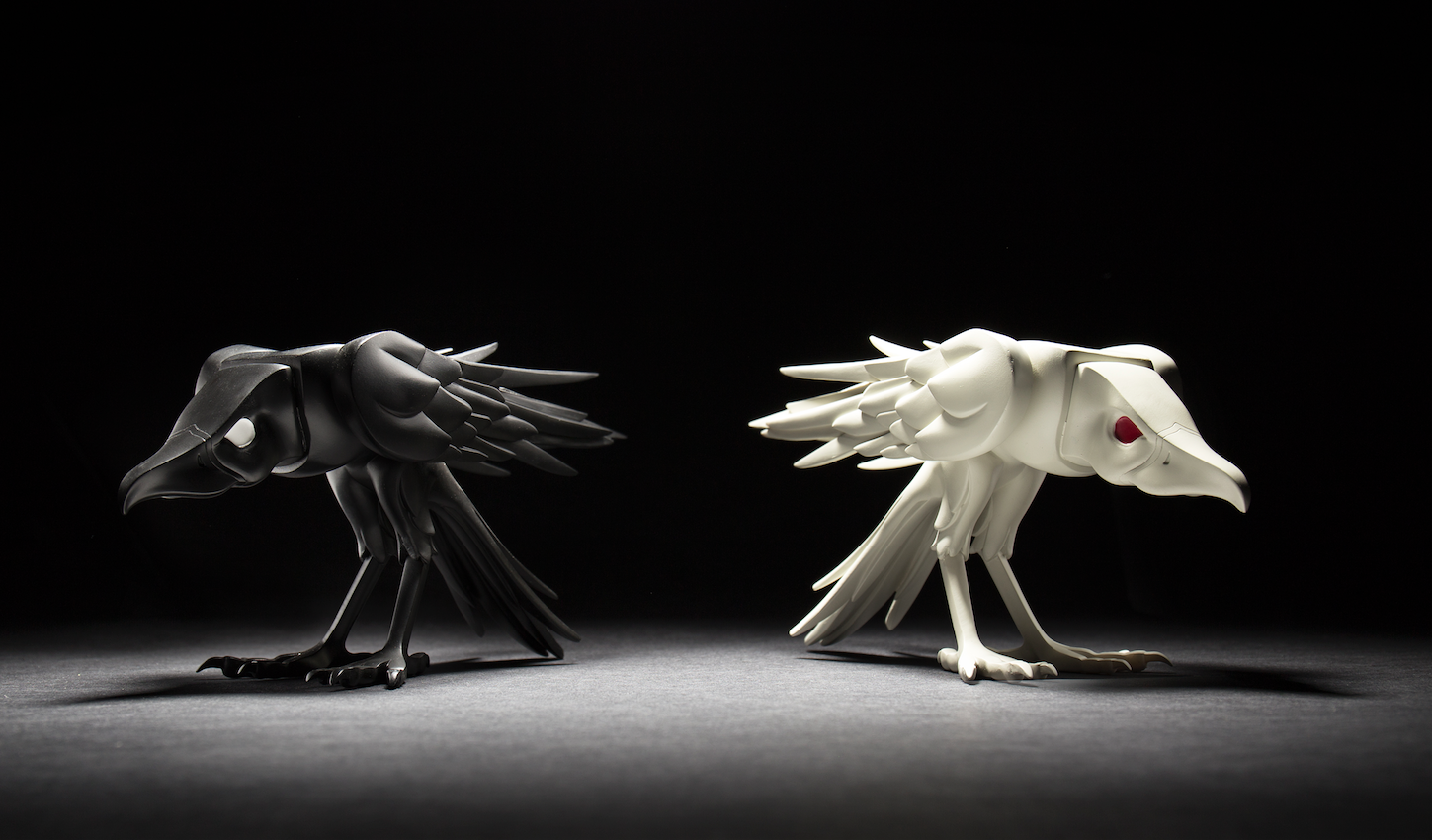 Happy Halloween! The Ravenous becomes available online tomorrow, Tuesday October 31st on all hallows eve. Sitting on nearest branch and calculating the perfect way to catch the eye of his prey, the Ravenous figure is a carefully created piece to bring a new feel to vinyl toys. We asked the artist a few questions about this piece and his art to better understand the symbolism and feeling of this piece, check it out!

How long have you been doing art?
Ive kind of always been doing something related to “art”. Back in high school I drew comic strip for the regional newspaper and just tried to be proactive on learning how to draw. I studied animation and were in the film/ advertisement and special effects industry for a decade. While all that was going on I started the Colus business in 2007 as a way to scratch my other itch which was t-shirt design. In the beginning my stuff was colorful but it already had a focus on simplicity and a play with symbols. It all just evolved over time. When I saw a designer toy for the first time I knew it was something I desperately wanted to be part of but being in South Africa it seemed impossible. Since then I started tailoring my shirt designs and animals to be potential toy designs. Fast forward many years and the thought of Kidrobot and my name being mentioned in the same breath still blows me away.

What is the inspiration behind this piece?
I love Ravens, they are super smart and they look so sinister. I wanted to make a figure that just watches you. Its unsettling and creepy.How would you describe your artistic style?
Rigid vs. organic shapes.  That is why you see a lot of my animals being impaled by some kind of symbolic rigid feature. I do everything in mostly black and white to help that theme along. I love symbolism, and the occult. It fascinates me.
What was the first piece you did with Kidrobot?
My first piece was an 8 inch Dunny! Still cant believe that happened. I was The Hunted Dunny and it came out in 2013.Animals seem to be a large part of your art… is there a reason why?
Animals work really well to bring humanistic themes and emotions across. I try to use African animals and themes a lot in my work as a love letter to where I come from.

What was something frustrating you ran into with this piece?
I made it entirely in the older method of digital sculpting by pushing and pulling each of the multiple thousands of points that make up the piece. It took a very long time. I also had a lot of trouble trying make them in my workshop. The idea was to 3D print the parts out and make some molds and cast a batch out. My 3D printer at the time could not handle the delicate feathers and after many failures I had to shelve the piece. Im so excited to see this guy come to life.

Some people who say the vinyl art scene is dead, what would you say?
I don’t think its dead, it might be a little stale. There was a period of time where feeds were full of reinterpretations of existing properties. Yes it will sell and you will make some money from it but it doesn’t push any boundaries.  To each their own and I don’t want to step on any toes but I feel there should be more risks taken with unique ideas. It doesn’t always pay off but that’s the stuff that will grow the scene. I think its a perfect time to step in and make a name for yourself if you can offer something truly original. I also see a lot of shade towards mass retail toy companies making vinyl figs but I think it should be seen as a opportunity to reach millions and bring them into the scene.

Tell us something your fans might not know about you…
Growing up I wanted to be a professional tennis player. I played and had training all waking hours for many years until a tennis elbow injury forced me to quit.