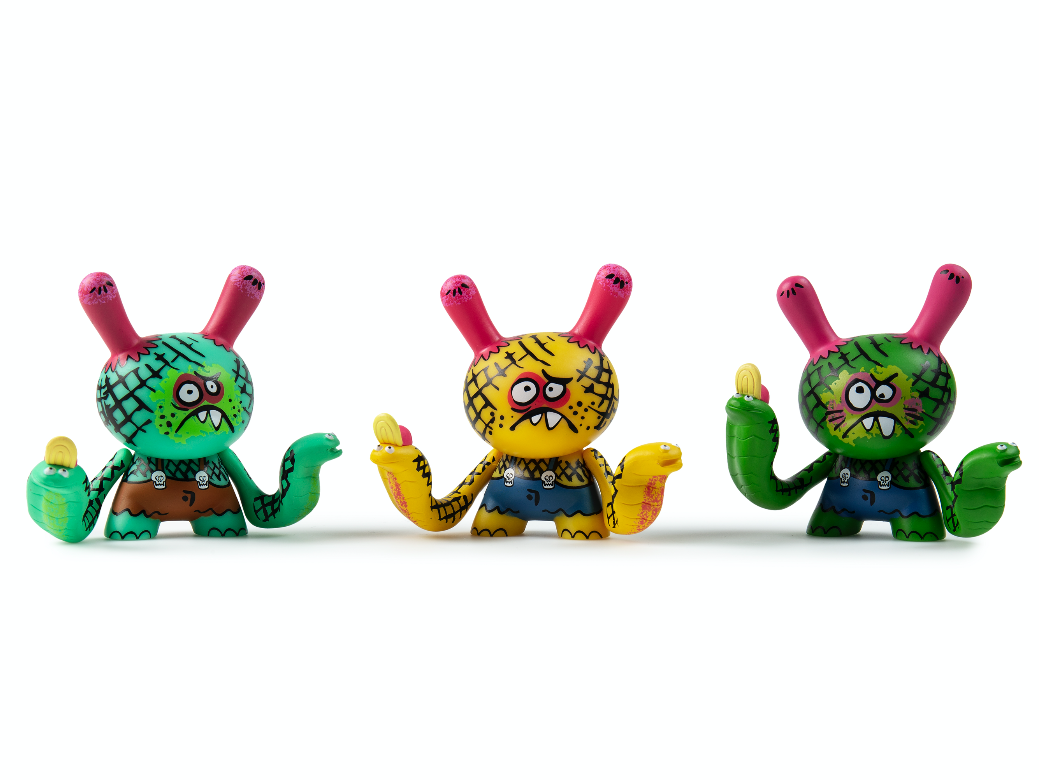 This design is based off an old graphic novel idea i had. It was about an orphan brother and sister with snakes for arms, and their escape to an island where they would no longer be mistreated for their awesome appendages.

What is this character’s personality like? Cobra Boy is a full fledged goofball.

What are three words to describe this Dunny? Rid ick ulous.

Where in the world (or other worlds) would this Dunny live? This dunny lives in a world and time parallel to ours, near the equator where it’s warm and humid.

It’s silly arms and that it’s my first Dunny. I really wanted this Dunny to feel like something from my mind, even though it’s channeled thru a “platform” shape.

I’ve included the original drawings i sent to KR. I’m old fashioned and don’t use anything vector based to make my art.

Making paintings and art toys for my little company Gravy Toys, and others.

I always take the stairs. Even when I was a tiny little peep, I was spending my class hours drawing exploding Star Wars figures with crayons and colored pencils.

My past projects with KR are a corn speckled pile of sloth poo. I’ve gone three rounds with doing my own designs for Kid Robot. The last one I was even paid in full for. None have ever seen light.

I love love love NBA basketball, I’m fairly politically informed, and I am a social hermit.

Yes, monsters very much do exist. We are monsters to other creatures.

I’ve been a fan of Japanese monsters since watching Ultraman after school everyday in the 1st grade, and getting out of bed in the middle of the night to watch monster movies, playing with my Micronauts and Star Wars figures:)

About the artist: Bwana Spoons is an artist all the way thru the brain and into the guts. He is a painter, illustrator, and toy maker. Bwana has his works featured on just about anything imaginable, from cars, to strollers, to shoes. His artwork has been featured around the globe from his current hometown of Portland, to San Francisco, Los Angles, New York, to Japan, Spain, London, Paris, Taipei, Bangkok, and a few parts in between. His favorite form of art these days is the installation, working with wood, and painting large scale murals. When Bwana isn’t doing any of this you can find him on his bike, knee deep in the Clackamas rock hunting, or tinkering away in his self made studio in Portland Oregon.