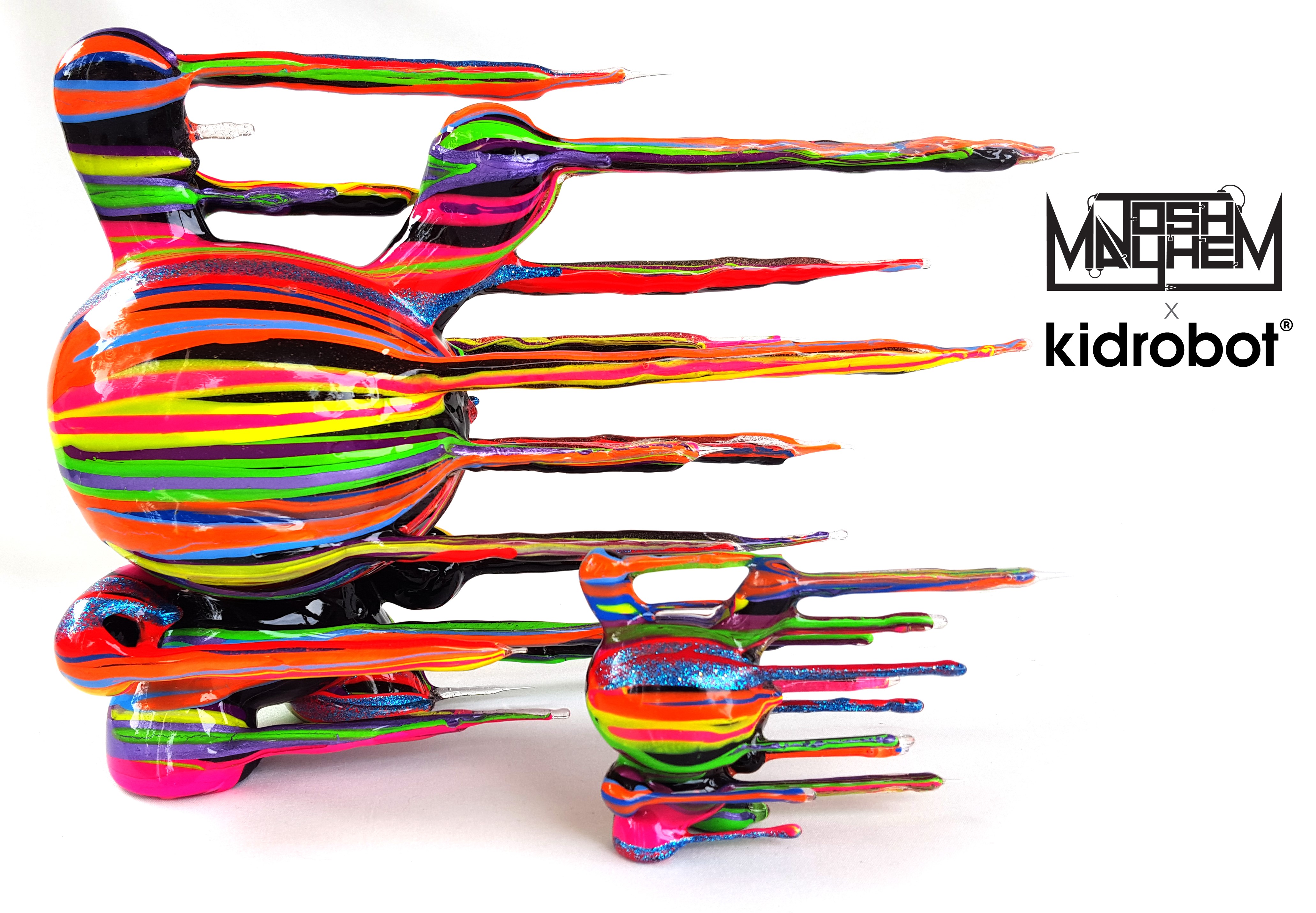 Josh Mayhem’s latest Blown Away Dunny Series is now completely sold out on Kidrobot.com! Check out our Q&A with Josh Mayhem to learn more about his creative career! 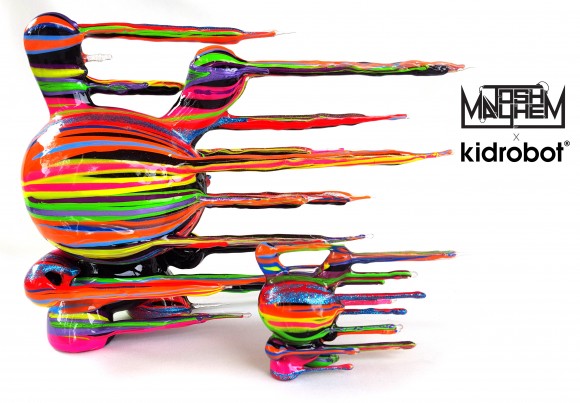 What made you want to collaborate with Kidrobot?

Well, as with a lot of art toy collectors I know, Kidrobot’s toys introduced me to this amazing world of art, especially the Dunny. I’ve always loved creating art, and collecting toys, so discovering this toy being used as a canvas for a wide variety of artists was very exciting, and I was instantly hooked. It only seemed natural to have a larger run Blown Away series released in collaboration with the company that originally inspired me to create this style of art.

What’s the inspiration behind your series?
The Blown Away concept evolved naturally through a series of different phases. The first “drippy paint” piece I ever made was an 8-inch Munny I called “The Blotter”. 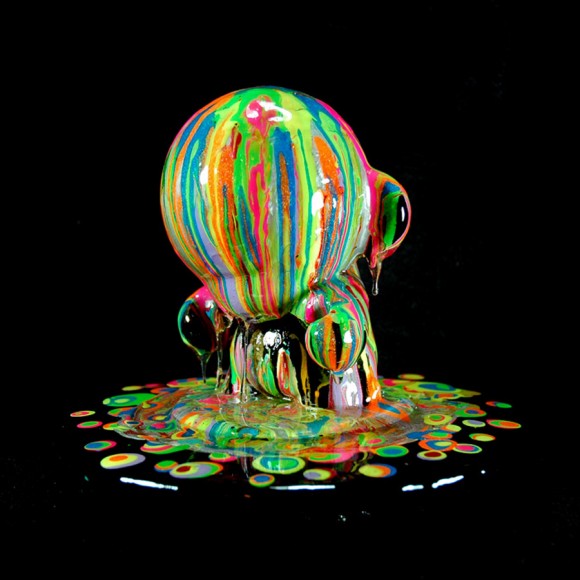 Soon after I was invited to participate in the Kidrobot “Spring Forward”  group show at Bludot. It was a Spring themed art show so I made my first “Acid Rain” piece to keep with the theme. 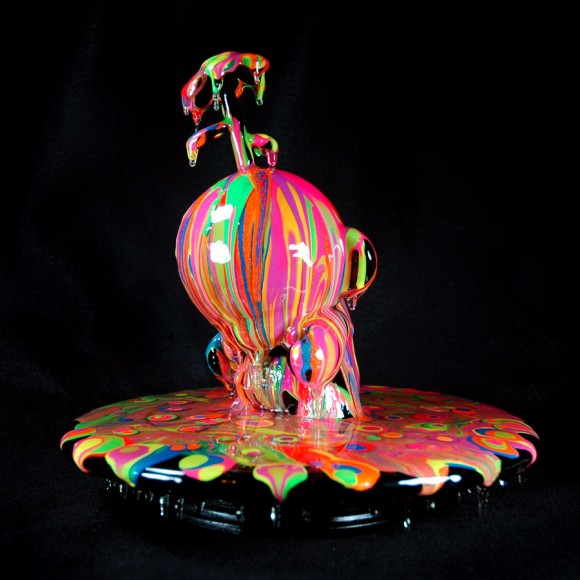 A series of different Acid Rain pieces followed until I was invited to my first Clutter Gallery group show. I really wanted to step it up a notch for that show which inspired the concept of a sideways wind swept effect. 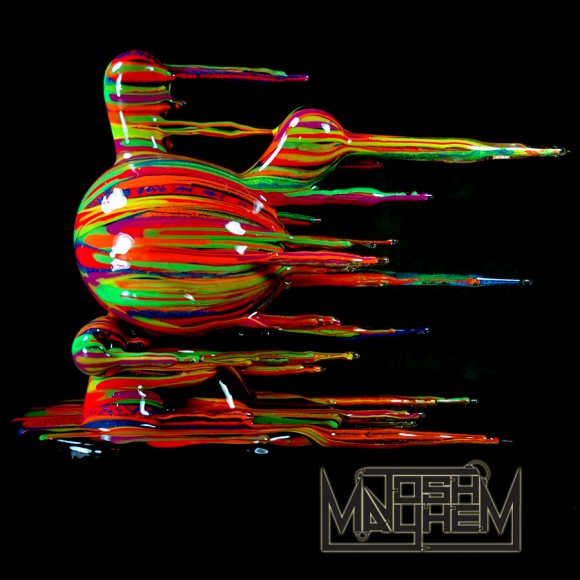 A series of Blown Away pieces followed until one day a collector of mine suggested that I lose the stand, which I have to agree looks better. The Blown Away style is continuing to evolve, and a big benefit of having such a large blind box release is being able to introduce a wide range of new colorways and designs as chase variants.

What was your artistic process like while working on this series?
In a word… complex. It required me to build multiple assembly line style racks that took up the majority of my workspace which made for a challenging game of Tetris. It took about 6 weeks to finish them all (minus the packaging) while working long hours each day usually 7 days a week. It was pretty exhausting, however watching the resin and paint drips flow down is rather soothing and relaxing, so it really wasn’t all that bad. Watching the whole series come to fruition has been incredibly exciting and motivating. The details of how they were made (aside from a few recent changes) can be found here.
Who do you consider your creative inspiration?

I’m inspired by anyone in the art hustle making a living solely off of their love for creating amazing things. Doing what you love to do is a gift not everyone gets to enjoy. I’m so grateful and humbled that I’ve recently been able to experience that kind of freedom.

What is a talent or skill you have the would surprise most people?

I was a Drum & Bass DJ and played pretty regularly in the Los Angeles DNB scene back in the day. I have most off my old DJ mixes up on my website you can stream here: http://www.joshmayhem.com/djmixes. LA Junglist Massive represent! BOH!

What can fans expect to see next from you?
I still plan on creating art based on my other mecha and steampunk styles, however we’re working on some big ideas at the Josh Mayhem camp for the Blown Away aesthetic. Besides making limited runs of different Blown Away Dunny color variants I’ll be taking on new platforms within and beyond the designer toy world. We also have a Blown Away solo show in the works. This year has been pretty incredible so far, and I’m eager to ride the winds of the great magnet to wherever this momentum may take me.